R&R Consult played a key role in making Nordjylland Power Station the world’s most efficient coal-fired CHP plant. The plant is Europe’s fourth-largest generator of electricity and owned by the City of Aalborg. R&R Consult have been involved in several projects for Nordjyllandsværket concerning the optimization of different parts of the process.

Considerable reduction of pump power and improved efficiency of the desulphurization process was achieved based on our simulation. 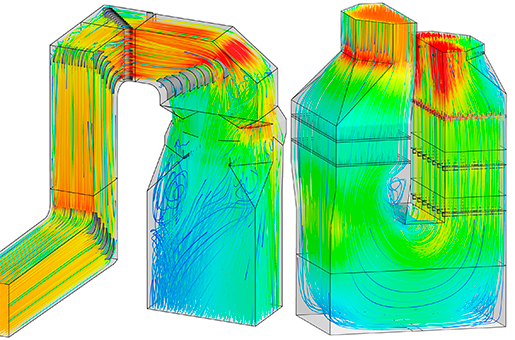 We modelled the complete exhaust flow and the injection, tracking and evaporation of the slurry flow. Based on our work and recommendations, changes were made to the exhaust flow path and the slurry injection. The result of this was very successful with an improved desulphurization process and a reduction of the power consumption for the slurry pumps by 30 percent. 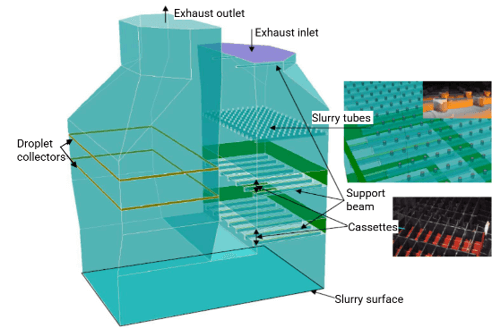 Outline of model for desulphurization calculation

The inlet exhaust flow distribution was predicted by including the upstream ducting. This revealed an uneven distribution, exacerbated by the transition duct into the desulphurization plant. The skewed flow profile was successfully amended by the installation of guiding plates, the design and location of which were determined based on the CFD-analysis. 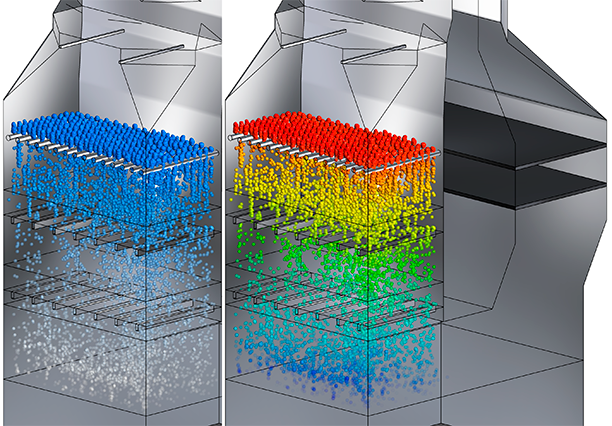 The modelling consisted of a 3D turbulent two-phase transient coupled calculation, including evaporation, breakup, and collision of the slurry droplets. The initial droplet size distribution, at the exit of the slurry pipe, was based on empirical relations as function of nozzle diameter, pressure and liquid properties.