A Mobile Simulation System (MSS) is a powerful, innovative tool for mitigation and containment of contamination from chemical, biological, radiological and nuclear (CBRN) agents.

The sources of CBRN agents are ubiquitous. They may originate from academic contacts, the biotech industry, national programmes, the power industry or natural sources, such as soil or infected animals or humans.
Small amounts of CBRN agents can kill hundreds of thousands of people, and the agents are fairly easy to conceal, transport and disseminate. It’s particularly difficult to detect, and protect yourself against, biological agents because they are invisible, odorless, tasteless and can be dispersed silently.

When an MSS system detects a CBRN event, it pushes sensor data along with data about wind speed, direction and GPS location to the mobile platform. The system uses pre-compiled wind-maps and real-time algorithms to predict how the CBRN particles will spread over time. It can also perform additional calculations, such as deposits in the area and best escape routes. The highly optimized code for real-time simulation is written in Fortran and runs on an embedded platform.

The project is a collaboration with Xtel of Aalborg, Denmark, and GNAcode of California. R&R Consult delivers the software for prediction of the aerosol dispersion. 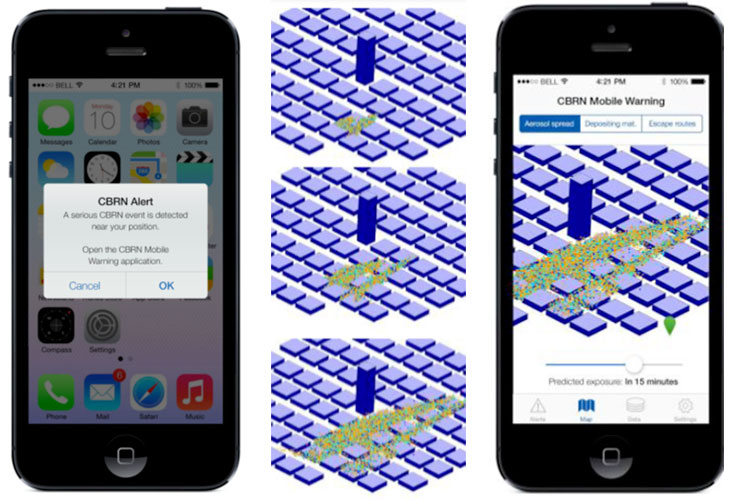 When the MSS system receives a CBRN warning, it uses location, wind speed and direction to instantly calculate the dispersion. It graphically shows a dispersion map and suggests escape routes.

The model calculates wind maps for a given city at different wind directions. The software predicts aerosol dispersion over time, including drag and gravity forces and turbulent dispersion.